Patients with advanced arthritis of the hip may be candidates for either traditional total hip replacement or hip resurfacing. Each of these procedures is a type of hip replacement, but there are important differences. Your orthopedic surgeon will talk with you about the different procedures and which operation would be best for you. 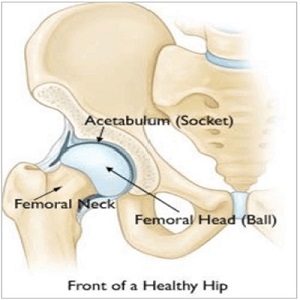 The hip is a ball-and-socket joint. In a healthy hip, the bones are covered with smooth cartilage that enables the femoral head and acetabulum to glide painlessly against each other.

In a traditional total hip replacement, the head of the thighbone (femoral head) and the damaged socket (acetabulum) are both removed and replaced with metal, plastic, or ceramic components. In hip resurfacing, the femoral head is trimmed and capped with a smooth metal covering. The damaged bone and cartilage within the socket are removed and replaced with a metal shell, just as in a traditional total hip replacement. 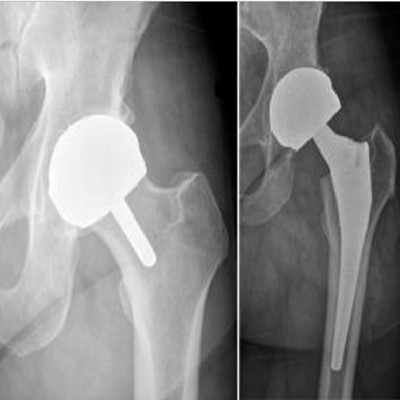 (Left) In the x-ray of a hip resurfacing taken from the front, a metal cap now covers the femoral head, and a small stem is seen in the femoral neck. A metal socket is also in place. Unlike the traditional total hip replacement shown on the right, the femoral head and neck are not removed.

The advantages of hip resurfacing over traditional total hip replacements are an area of controversy among orthopedic surgeons. A great deal of research is currently being done on this topic.

Your doctor may recommend surgery if you have more advanced osteoarthritis and have exhausted the nonsurgical treatment options. Surgery should only be considered if your hip is significantly affecting the quality of your life and interfering with your normal activities.

Unlike hip replacement, hip resurfacing is not suitable for all patients. Generally speaking, the best candidates for hip resurfacing are younger (less than 50), larger-framed patients (often, but not always male) with strong, healthy bone. Patients that are older, female, smaller-framed, with weaker or damaged bone are at higher risk of complications, such as femoral neck fracture and should be treated with total hip replacement.

Your surgeon will also see you before surgery and sign your hip to verify the surgical site.

Your surgeon will make an incision in your thigh in order to reach the hip joint. The femoral head is then dislocated out of the socket. Next, the head is trimmed with specially designed power instruments. A metal cap is cemented over the prepared femoral head. The cartilage that lines the socket is removed with a power tool called a reamer. A metal cup is then pushed into the socket and held in place by friction between the bone and the metal. Once the cup is in place, the femoral head is relocated back into the socket and the incision is closed. After the surgery you will be taken to the recovery room, where you will be closely monitored by nurses as you recover from the anesthesia. You will then either be discharged home or admitted to the hospital. Patients admitted to the hospital are usually discharged after a one-night stay.

As with any surgical procedure, there are risks involved with hip resurfacing. Your surgeon will discuss each of the risks with you and will take specific measures to help avoid potential complications.

Although rare, the most common complications of hip resurfacing are:

You may begin putting weight on your leg immediately after surgery, depending on your doctor’s preferences and the strength of your bone. You may need a walker, cane, or crutches for the first few weeks until you become comfortable enough to walk without assistance.

You can expect some pain and discomfort during the recovery period. Many types of pain medication are available to help control pain, including opioids, nonsteroidal anti-inflammatory drugs (NSAIDs) and local anesthetics. Treating pain with medications can help you feel more comfortable, which will help your body heal faster and recover from surgery faster.

Opioids can provide excellent pain relief; however, they are a narcotic and can be addictive. It is important to use opioids only as directed by your doctor. You should stop taking these medications as soon as your pain starts to improve. You will be given exercises to help maintain your range of motion and restore your strength. 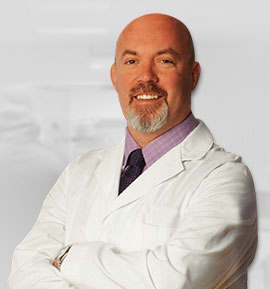